Unlike how many people think that fantasy worlds come into being with a poof mine came into being through a lot of hard work.

When I was about 6 I realized that I had a really strong sense of imagination and that if I closed my eyes and focused really hard I could create a world in my mind to escape the world that my body occupied. It started out with elfen looking creatures as well as a few dragons.

When I was twelve my world was complete. Even if there were some unexplored parts I figured that I’d get to them later. I never got the chance to explore them the way I used to because that was the year that I was never able to return to Jericho by closing my eyes and focusing.

Time moved on and I started my first draft of Fire of the Night, it had been in my mind long enough. Well I made a rough map when I was almost 17: 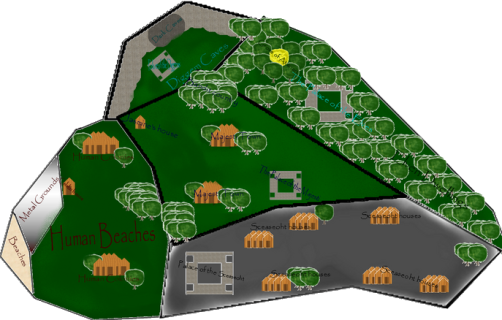 The water around it is the ocean. To put how big this place is into perspective, it lives in the middle of the Bermuda Triangle, which is roughly 5 times the size of Colorado or almost twice the size of TX. I had a whole theory about Jericho and one day actually told my parents that I wanted to go to the Bermuda Triangle just to see if I could find my world when I was 9.

I was always fascinated with the disappearances around the Bermuda Triangle and thus that was where my world must have existed, invisible to the human eye and only some people get lost in there and honestly don’t remember where they are, others just vanish without a trace, and still others end up being found later after a crash with the dead bodies.

That was how Jericho was formed, from a theory about missing people and the imagination of a six year old. As I got older, the world matured and got better. I still have yet to make another map of Jericho since then…however that is the rough sketch of what the world looks like in Jasmine’s Time, aside from a few missing castles, like the main Majesti Castle (Rajan’s home) and Renaya’s Castle, but it looks like I actually stuck a castle in there that doesn’t appear for a few more centuries….wow go me.

As for Natalix….that actually started out as a “what if”. Now most fantasy worlds have gods and goddesses, mine doesn’t. Mine has the “Great One” or as humans know him: God. There was one character that lived in an underworld known as Karach Oracle, he is the Keeper of the Dead under a curse. But what curse we don’t know. Nor do we know why his twin sister Miruial is a ghost and the leader of the Rainbow Ghosts (her name and what she does for a….”living” for lack of a better word, actually came from my friend Sarah (who did my Author Photo) who loves rainbows and her online name was Miruial pretty sure I’m misspelling that, the correct spelling is in another file somewhere).

So what if there had been gods and goddesses in Jericho before it was Jericho? The truth is that there was another world before Jericho, it was named Dinarus. There were only a few different types of elves in that world as well as dragons and gryffins. They were lead by the King of the Gods and his siblings, including Death, Life, Darkness, Ice, etc.

So what happened to this world? The short answer is that the King of the Gods knew that their time was coming to an end and thus started creating another world that was similar to their own, however it was built on top of a world where there was no fantasy, so there would be no human access to their world. They would be alone. Or so they thought, Dreamers started playing with the world and adding their own bits of things.

He finished his work just in time for the Flood to hit. He escaped with his siblings (except for three and I’ll get to that) and mortal wife. He then gave up his status as a god and lived out his life as a mortal. The Fallen were born from the remaining siblings, except for six of them. The Four Fallen of Death (Persephone, Hades, Erebus, and Thanatos), the Fallen of Life, and the Fallen of Darkness.

Why are there four Deaths? Well….Persephone is the Fallen of the Death of Children, she has the form of a tall woman, however whenever she goes to help children (and I mean little bitty ones, from just born all the way to 12-year-olds) go to the afterlife she has the form of an imp that would play with her until they moved on. She’s also the only one with another form.

Thanatos (who is also the Prince of Poison from Jericho) is the Fallen of Accidental Deaths, these are the ones that don’t try to commit suicide but it just happened that kind of thing.

Hades is the Fallen of Death by Normalcy, he’s the typical Grim Reaper cloak, scythe, etc. He’s the one who goes to find the ones that are dying of old age, heart attacks, anything considered “normal” deaths.

Erebus is the Fallen of Horrible Deaths, he’s the one who gets all of the bad cases, the people who end up dying horrible by either their own fault or anything else. Like falling off a cliff, stabbings, anything where the corpse would be mangled.

Getting back to the ones who ended up staying behind. Death and Life were two of the three siblings who didn’t end up going to Natalix. Death, or rather Karach, was under a curse in the underworld. He was forced to stay behind and look after the souls of the dead until his flesh rotted away, leaving a skeletal watcher, chained to the underworld, unable to never leave, and no longer allowed to have visitors unless they came to him for aid.

His twin sister Life, died in the flood because she stayed behind to look for her brother. She found him when she became the Queen of the Ghosts.

As for the final sibling *smirk*, the god of Darkness was stripped of his powers, except for whatever he needed to survive. He took another name: Delano. And started a family with a woman named Aria. She took his first name as her Surname and from those two, the Delano were born.

*bow* and that’s how you make a complicated world.

Keep on writing dudes! And don’t forget to be awesome!